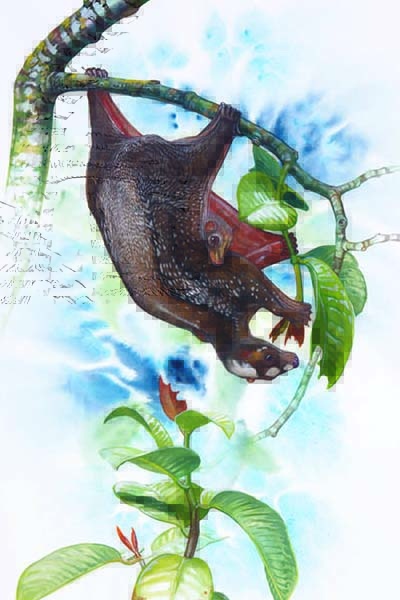 Colugos are arboreal gliding mammals found in Southeast Asia. Just two extant species make up the entire family Cynocephalidae and order Dermoptera. They are the most capable gliders of all gliding mammals, using flaps of extra skin between their legs to glide from higher to lower locations.

Colugos are tree-dwelling mammals. They reach lengths of 35 to 40 cm (14 to 16 in) and weigh 1 to 2 kg (2.2 to 4.4 lb). They have long, slender front and rear limbs, a medium-length tail, and a relatively light build. The head is small, with large, front-focused eyes for excellent binocular vision, and small rounded ears.

Colugos are proficient gliders, and they can travel as far as 70 m (230 ft) from one tree to another without losing much altitude. Of all the gliding mammals, colugos have the most extensive adaptation for flight. They have a large membrane of skin which extends between their paired limbs and gives them the ability to glide far distances between trees. This gliding membrane, or patagium, runs from the shoulder blades to the fore paws, from the tip of the rear-most fingers to the tip of the toes, and from the hind legs to the tip of the tail.