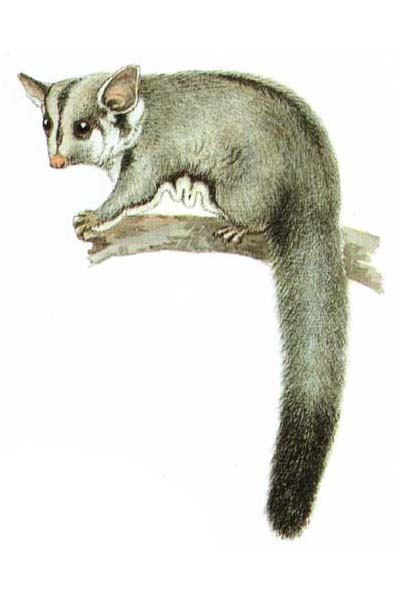 The family Petauridae includes 11 medium-sized possum species: four striped possums, six species of wrist-winged gliders in the genus Petaurus and Leadbeater’s possum, which has only vestigial gliding membranes. Most of the wrist-winged gliders are native to Australia, most of the striped possums (genus Dactylopsila) to New Guinea, but some members of each are found on both sides of the Torres Strait.

All petaurids have obvious facial markings, a well-defined dorsal stripe, very large lower front incisors, and four-cusped molars. Despite their distinctive appearance, petaurids are closely related to the ringtail possums (family Pseudocheiridae) and are grouped together with them to form the superfamily Petauroidea.

The wrist-winged gliders are omnivorous, specialising on sap and nectar, but taking a wide variety of supplemental foods. The gliders appears to have evolved in the open forests of Australia — gliding membranes are an adaptation which aids mobility when the forest canopy is incomplete, and are of little use in rainforests — but now has representatives in New Guinea and many of the smaller islands nearby. Their similarities to the unrelated flying squirrels are an example of convergent evolution.