Description: A very large glider with distinctive colouration that consists of black on its upper surface with varying degrees of white. Its tail and the margins of its uropatagia are white and less than one-third of the plagiopatagium has a white margin. Its forefeet are completely black, or with very little white, and its hindfeet are at least partly black.

Distribution: Occurs from eastern Liberia and Ivory Coast to Ghana, in moist high forests with numerous tall emergent trees and palms that are not linked by lianas and are well-separated, allowing unhindered glides from one tree to another.

Reproduction: Appears to have two breeding seasons per year, in April and September. The female produces one to three young.

Ecology: This species is wholly nocturnal and emerges well after sunset. Contact calls have been described as deep hoots. They appear to live in pairs, but up to six individuals may be found together in a sleeping hollow within a tree. When disturbed in its den, Pel’s Scaly-tailed Flying Squirrel hisses and snaps its teeth, the sound of which is greatly amplified in the tree hollow.

This behaviour may deter birds of prey, primates and small carnivores, as well as hornbills (that may compete for nest holes). Its bold colouring suggests that aggressiveness and large size may make it less vulnerable to predation than the smaller anomalure species.

Status: Data Deficient. Given the rapid rate of forest degradation in West Africa, most populations are likely to be threatened. Surveys to assess the current status of all populations are urgently needed.

Note: The Mbuti pygmies in north-eastern Democratic Republic of the Congo (= Zaire) burn the skin of this anomalure and grind it into a powder to make the drug Bau. By night, they blow this drug into the face of a victim, who becomes unable to defend themself. 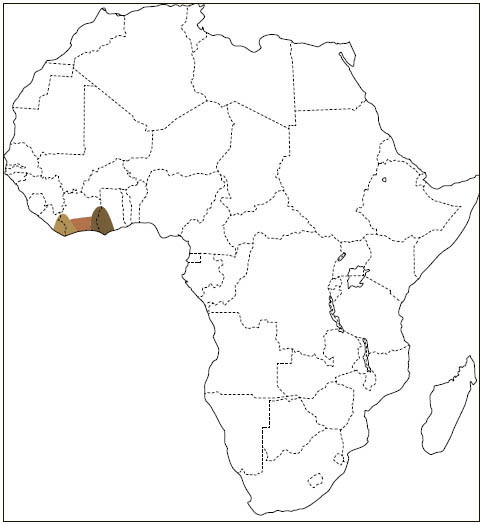 Anomalurus pelii auzembergeri — Eastern Liberia and extreme west Ivory Coast, west of Sassandra River. There is no evidence for its occurrence in Sierra Leone as previously believed. Its upper surface, including tail and limbs, is uniformly black.