Description: A medium-sized glider with a soft, greyish-yellow pelage. Its upper parts are dark, with black under-fur and its guard hairs are black at base with white to buff tips. It has a large orange spot behind its black-tipped round ears, while the base of its ears is a bright russet.

Its throat is white, and the remainder of its underparts are greyish, due to black under-fur and white tips of guard hairs. Its feet are black but its legs and the outer margins of its gliding membranes are orange. The upper side of its feet are dusky in colour.

Reproduction: Mating takes place during mid to late December and early to  Pregnancy lasts for approximately days after which time one to three young are born in early March to  The young appear to reach sexual maturity at about 22 months.

Ecology: Lives in grottoes or crevices, most of which are situated 30 metres high, in the middle of cliffs. One individual occupied a nest, round in shape, centimetres in diameter and made of sedges (Carex sp.) with the entrance also plugged with sedges. Observations of newly captured animals were found not to get along well with animals that were hand reared, and heated fights were observed between animals until days after being introduced.

No fights were observed between animals caught from the same cliff, which included two females and six young that readily slept together in the same nest box. Animals kept in captivity have lived for more than 10 years, but there are no data on individuals in the wild. The collection of animals for their excrement (called faeces trogopterori) is widely used in Chinese and Korean medicine for the treatment of duodenal ulcers (by protecting the gastric mucosa) and for pain relief. This has contributed to the decline of animals in the wild. 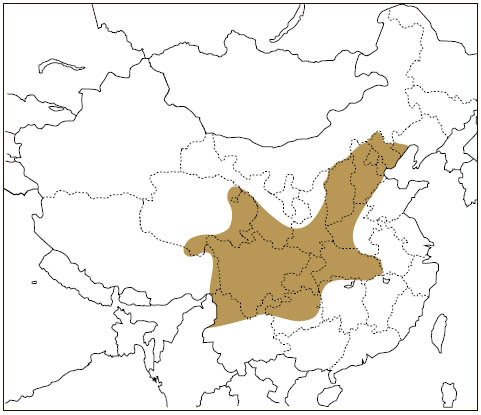