Description: A medium to large glider, similar to Pel’s Scaly-tailed Flying Squirrel, but with a sharper muzzle and shorter and rounder ears. Its pelage is thick and fleecy and lightly waved. The fur at the base of its tail is smooth-haired and at the end has a slight tuft. Its underparts are well haired with the gliding membrane rather more lightly haired.

Its upper parts are commonly a silverishgrey with a central stripe of golden brown down its back, while its underparts are greyish or yellowish with an orange throat and chest. It often has a white spot on the forehead but does not have a dark ‘mask’ around the eyes. Its tail, which is narrower than in other scaly-tailed species, has up to nine pairs of scales on its underside at the base. This species is also similar to Lord Derby’s Scaly-tailed Flying Squirrel but is smaller.

Within this region they are found from sea level up to 2500 metres. It shows a marked preference for palm groves, and can withstand some cultivation and plantation in its habitat if palms and some big trees remain.

Reproduction: There appears to be a prolonged breeding season at the end of the wet season. The female gives birth to one young and carries it while it is small.

Ecology: Rests in tree holes in the upper levels of the forest or will hide between palm fronds or in dense congregations of leaves and twigs at the summits of the trees. It will also cling to the sheltered underside of a tree branch, close to the trunk, where it escapes detection by resembling a flake of loose bark. It is active during the day at noon and during the hours before sundown.

These habits may account for its presence in the mountain forests and also for its colouration, which, in life, is bright leaf-green above and vivid golden yellow below, with the sides of its head, limbs, and the edge of its gliding membrane pearl-grey. These colours fade after death and preservation to dull brindled grey-olive above and dirty yellowish-red below. Observations of live captive specimens showed that their colours also fade at night.

That this was not an illusion was confirmed by the fact that an individual killed in the daytime took three days to fade to the ‘death colouration’, whereas another killed at night altered almost immediately. Whether the intensification of the colours in the presence of sunlight is due to algae in pits in the hairs or to some refractive process, it is impossible to say. Predators include the Chimpanzee (Pan troglodytes), Crowned Eagle (Spizaetus coronatus), Long-tailed Hawk (Urotriochis macrourus) and pythons. 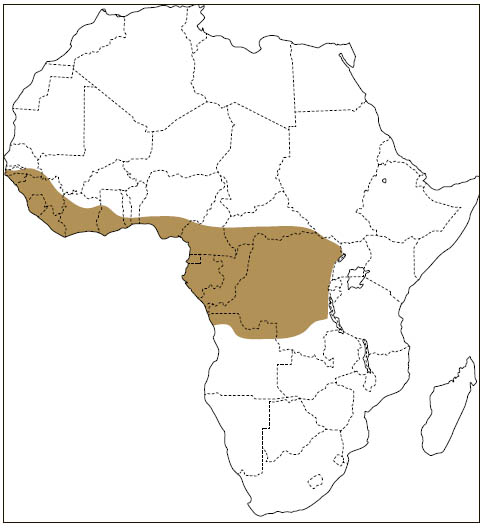