Description: Its colour is highly variable, with upper parts ranging from brownish to reddish, with dark grey patagia, black ears and a silverish stripe on its nose. Its head is usually grey to silver-grey, with black hair around the base of its ears, sometimes reaching the eye. Its patagia have black bristle hairs along the edge behind the elbow strut. Its underparts and its patagium is generally white, but sometimes the underside of the membrane between its hind legs is brownish to blackish.

The base of its tail has The main variation is in the grey or russet tints on its back and shoulders. Its face is relatively short and round; its naked pinkish ears are set in a bed of dense velvet-black fur. Black bristles cover its hind claws.

Reproduction: Usually only one young is born at a time (although there are records of two or three), towards the end of the rains in September to November. The young remains on a ledge, high up in a hollow tree, until almost fully grown. Both parents bring it food which is well masticated and carried in the mouth and cheeks, which are swollen with a wad as large as a tangerine.

Diet: Mainly bark of trees of the genera Strombosia, Klainedoxa and Neoboutonia. In Zaire it eats the fruit of Carapa and Syzygium, leaves of Myrianthus and the inner bark of Cynometra, Strombosia, Standtia, Klainedoxa and Pentadethra. It also eats fruits, flowers, leaves, nuts and occasionally ants and termites.

Ecology: Nocturnal, it lives in vertical hollow tree trunks with exit holes or cracks, as high as 40 metres. In some woodlands it may occupy empty beehives. During the daytime it rests in hollow trees, preferably in the virgin forest, from which it emerges just after sunset. It tends to nest alone although several individuals may share a denning tree.

It appears live in the same hole all year, changing holes only when fruit is ripe in another area. Individuals retain the use of their dens over very long periods, although seasonal shifts have been recorded. In some areas females are known to segregate to give birth and rear their young. As well as a threatening or defensive hiss and growl, this species also purrs and twitters. It likes to sunbathe in the early mornings and sometimes in the evenings.

The night is spent moving about the lower branches of tall trees and the smaller growth, often not more than 9 metres above the ground. At night it will travel, on average, 540 metres, with a home range of over 3 hectares. The density of this species has been found to be between individuals per square kilometre. Known predators include the Blue Monkey (Cercopithecus mitis). 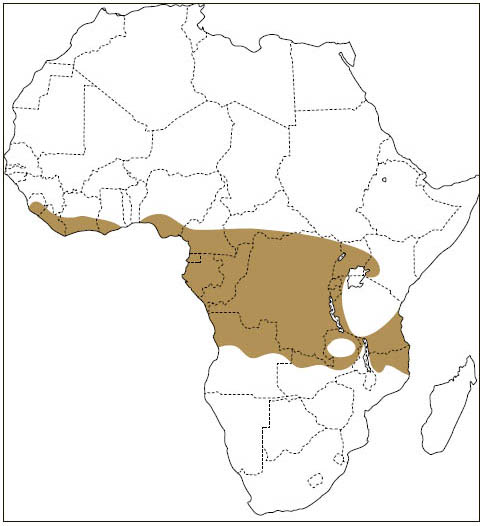