Description: A relatively small glider with rich, largely uniform, tawny to chocolate-brown colouration, which distinguishes it from all other Petaurus gliders.

Distribution: only gliding mammal to occur on the islands in the Schouten Group off the north-west coast of Papua. It is common on Biak and Supiori Islands, and is known from a single specimen from the Owi Islands, which was initially described as Petaurus kholsi. On these islands it is common around gardens and village surrounds in the Korido area of Supiori and in eastern Biak Islands.

Reproduction: Females have been collected with one and two pouch young in September.

Diet: Little is known of its diet. Several individuals have been captured while feeding on bananas and a group of six were captured in a hollow in a Mangrove Tree (Bruguiera sp.) near a village.

Note: The Biak Glider was previously recognised as a subspecies of the Sugar Glider until it was separated and identified as a full species. 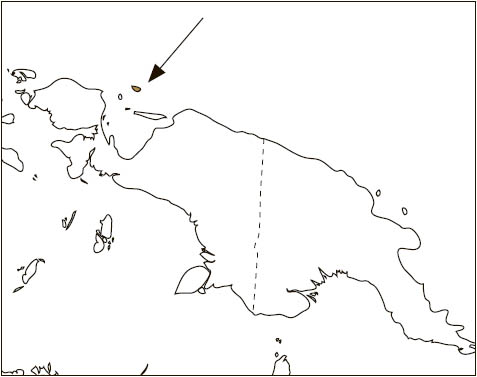