Description: A small anomalure whose upper surface varies from near black, grizzled grey to mottled tan or olive-brown. The membrane adjoining the tail is usually yellower while the lateral membranes are dark grey.

The head is grey without borders around the ears. The underside is pale yellowish-white, without a tinge of rufous, as are the bristles covering the hind claws.

Distribution: Occurs in central African rainforest from the high forests of Cameroon, south-western Central African Republic, Equatorial Guinea, Gabon, Congo, Democratic Republic of the Congo (= Zaire) to western Uganda and north-west shore of Lake Tanganyika. There is an isolated population in west Liberia on the Du River. The habitat is limited to forests in plains and mountains up to 2000 metres.

Diet: Includes bark and fruits. The drupes of parasol trees (Musanga sp.) have been recorded as a source of food.

Ecology: Population density has been found to be only five individuals per square kilometre. 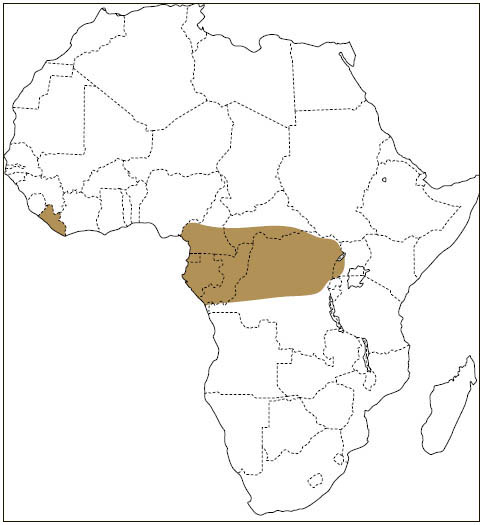