Description: A very small scaly-tailed squirrel with a slightly more robust build than the Pygmy Scaly-tailed Flying Squirrel and with darker fur. The upper surface has pale grey fur with brown tips, giving a brown-grey appearance, while its underparts have pale yellowish-brown fur with a light grey under-fur.

The ears and face are somewhat longer than the Pygmy Scaly-tailed Flying Squirrel and the tail is proportionately longer with sparse long hairs along its length and dense short fur underneath.

Distribution: Occurs in rainforests of western and central equatorial Africa from Sierra Leone, Liberia, Ivory Coast, Cameroon, Equatorial Guinea, Gabon, and further east through Democratic Republic of the Congo (= Zaire) to Ituri Forest and eastern Congo. Its overall range is similar to the Pygmy Scaly-tailed Flying Squirrel but appears to be rarer in the eastern part of their ranges.

Ecology: It is known to sleep in large hollow trees in high deciduous forest during the day. Both the Long-eared Scaly-tailed Flying Squirrel and the Pygmy Scaly-tailed Flying Squirrel are gregarious, inhabiting certain hollow trees, to which they always return. In many cases the two species live together in the same tree to the number of 100 individuals.

If disturbed during the daytime they seem to be in no way disconcerted by the light, but issue forth from the holes, career about the surface of the trunk and branches, faster than mice on a level floor, and take to the air in clouds. They float away among the neighbouring trees like bits of soot from a chimney, steering themselves over and around obstacles with the facility of birds, and landing silently, 100 metres away, with little apparent loss of height.

Other animals have been observed to glide in a series of diminishing spirals and land on a portion of the trunk lower down. Both of the Idiurus species, unlike Anomalurus, glide very slowly, with the membranes taut and more-or-less flat. The species guides itself, rising, falling, turning to right or left, and effects a landing on a vertical surface by a graceful curve. It runs like a dog, with a leftright, right-left motion of the limbs. A translocated male was found to travel 790 metres. Population density has been found to be between individuals per square kilometre.

Note: The Mbuti pygmies in north-eastern Democratic Republic of the Congo (= Zaire) believe this species may not be eaten by pregnant women, otherwise their baby might be born without a rectum, penis or vagina and vomit for their entire life. 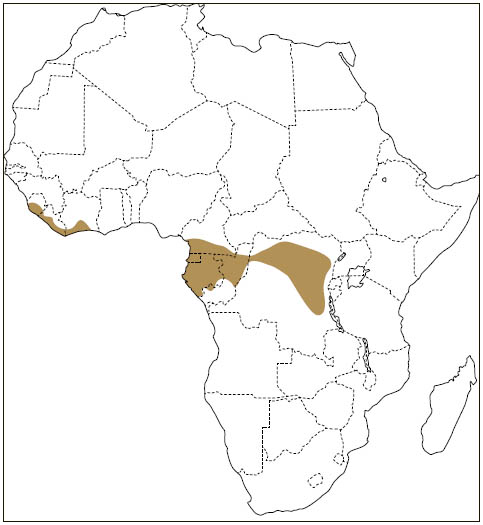